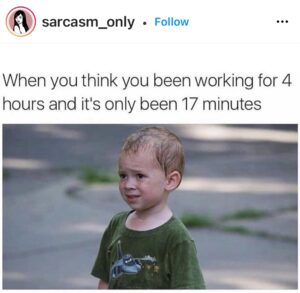 I found the photo above on @sarcasm_only's Instagram page and appreciate not only the kid's great expression, but also the fact that this happens to me all the time. Usually, I think about how I deserve a snack break after three or four minutes of work. I might not be getting much work done, but at least...

Several years ago, I got to attend a workshop on counseling for non-counselors. (If you're interested, it's a pretty amazing program called The Stanley H. King Institute. I recommend it highly.) There, I heard for the first time a complaint against the phrase, "at least," about which I'd never given a moment's thought.

Think, if you will, for a moment about when people throw us an "at least." You might be complaining about something that's bothering you or making you sad, and in an attempt to cheer you up, I'd say, "At least it's not" and name a much worse thing. How does that make you feel? You're probably thinking, "Okay, so am I still allowed to feel bad knowing that it could be worse?" How would you feel if instead, I offered you, "I'm so sorry. That's a lot to deal with." My guess is that you'd feel more supported.

I don't think people ever want to be told that what they're feeling lousy about isn't the worst case scenario, so I've stopped saying "at least." Whatever someone's going through, it doesn't feel better to focus on how things could be worse. Sometimes, we need to feel bad for a while and let ourselves wallow. Someone else's telling us that we don't have it that bad doesn't allow us the space/time to live with the feeling, which curtails our own ability to claw our way out. By acknowledging and letting people sit with their difficult emotions, we give them permission to accept and move on.

What words do you like to hear and hate to hear when you're feeling out-of-sorts? What kinds of support bolster you up and what kinds feel like a further smack in the knee caps? Please share your thoughts in the comments.