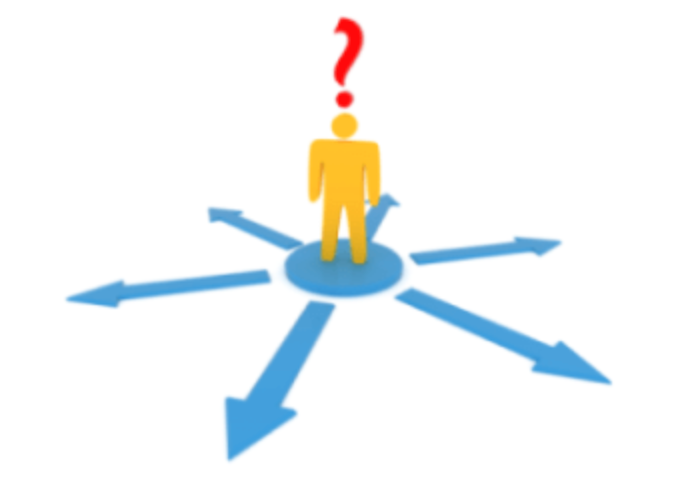 I took the image above from a management training study guide about making decisions. It perfectly captures the way I used to think about making decisions, which is that resting on some neutral ground, a person has multiple directions she could choose to go, each of which would lead her to a different place.

What I've realized, however, is that there's no such place as neutral ground. The title of this post isn't that we shouldn't delay making decisions but that it's impossible to delay. If I think about all the paths I could take and I don't step forward, I am making the decision to stay still. That's not neutral.

After the summer of 2020, I came to the new-to-me (but not new to people who'd been thinking clearly before me) idea that there's no such thing as passively anti-racist. (You can read my post about it, if you didn't already.) Neutral doesn't exist. By not doing anything, we're participating in the system that we have.

Similarly in life, while we're not making steps in any direction, we're privileging what we're doing now. There's a term in behavioral economics called the Present Tense Bias. You don't have to have a PhD in the field to know that people often gravitate towards what is nearby us rather than what is difficult to reach. Ask any toddler if she wants to leave the playground for the potential of a fun treat later and you'll understand the concept (once the sound of crying subsides so that you can think again).

But that doesn't mean that staying put isn't making a decision. The only way I've found to force myself to weigh my present satisfaction with how Tomorrow Carita will feel about the choice to make no choice is to try to remember opportunity costs. By sticking with what I'm doing now, what might I be giving up? If I make make no choice now, what opportunities might I be losing out on in the future?

How do you convince yourself to acknowledge and win over the present tense bias? When have you noticed yourself thinking that delaying a decision was possible rather than its own decision? Please share your ideas in the comments.